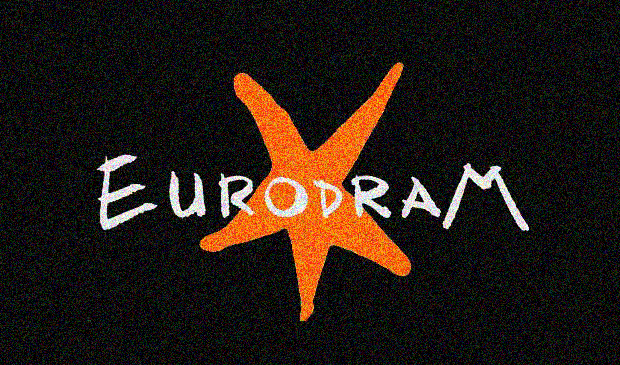 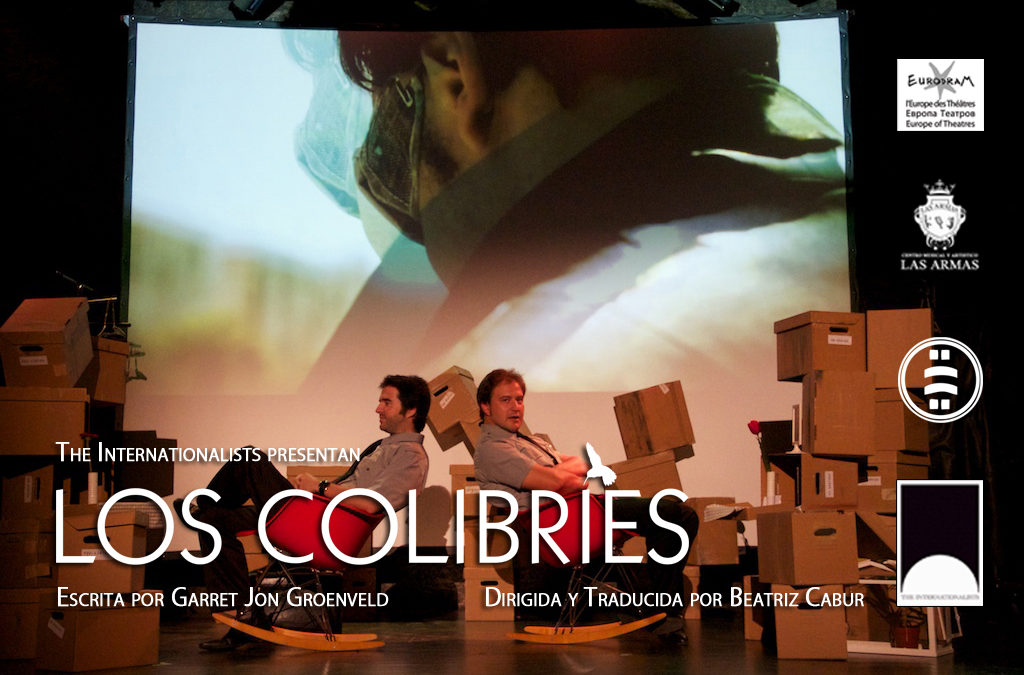 As a part of the worldwide presentations produced by The Internationalists, and directed by Beatriz Cabur, “The Hummingbirds” by Garret Jon Groenveld, was presented in Zaragoza, Spain on June 22, 2012 at the Armas Center.

Another staging, also directed by Beatriz Cabur, was also presented in Zaragoza at the Arbolé Theatre.

‘Los Colibríes’ is a comedy of menace that takes place in a very near future where, if you are out of work, you are assigned a job by the unemployment office. Odds are, you’ll hate the job, but as the two employment officers say “If you can walk, you can work!” One day, their routine is broken after a fatal act of violence, and delicate questions arise about responsibility, loyalty and killer hummingbirds. 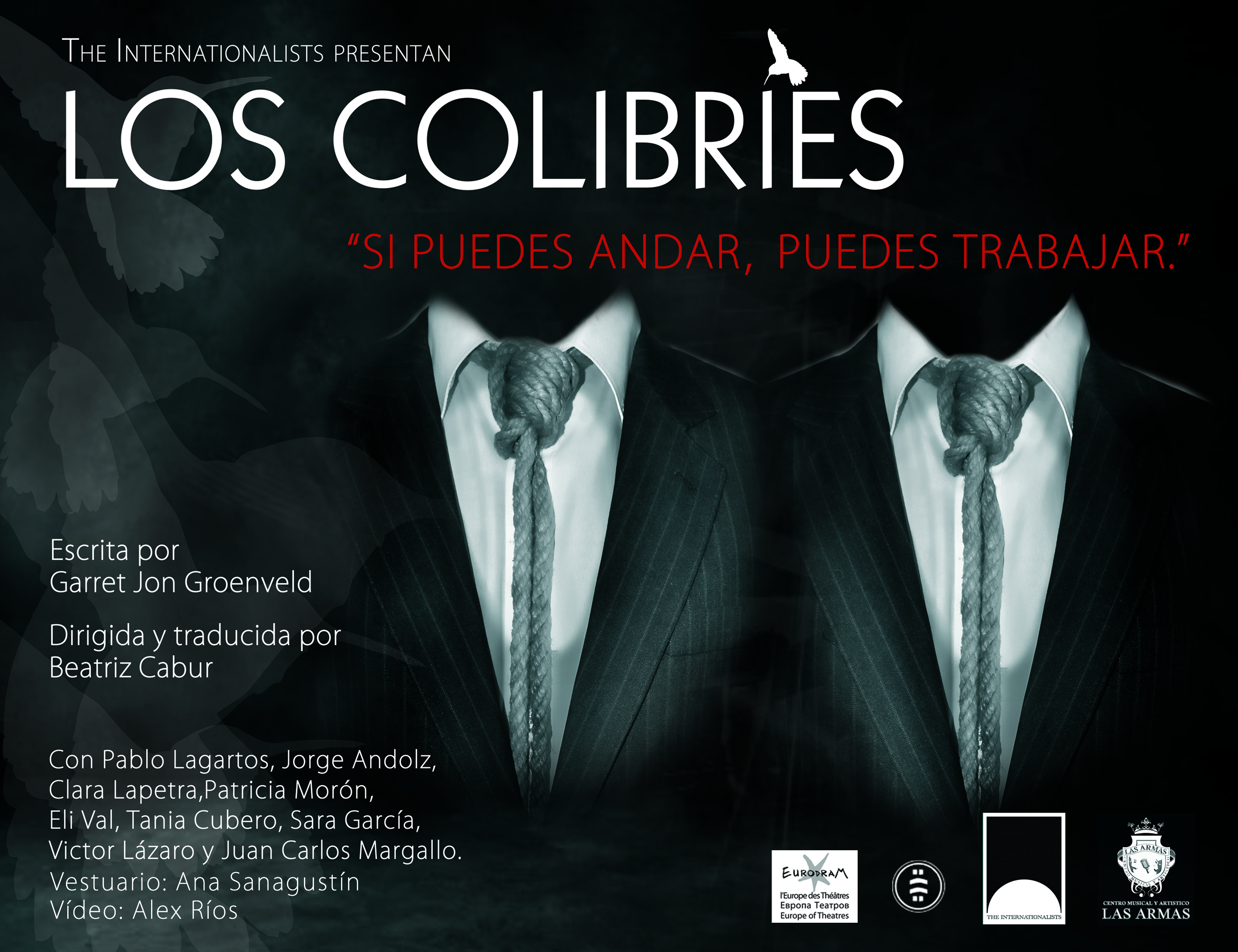 Designer Raquel Burgueño has created a poster for the Spanish presentation of “The Hummingbirds”.

Raquel will also design the posters for the rest of the presentations of “The Hummingbirds” that will take place in New York, Mexico City, The Hague, Berlin and Moscow. Once the presentations are finished, all posters will be published together in a collector’s series. 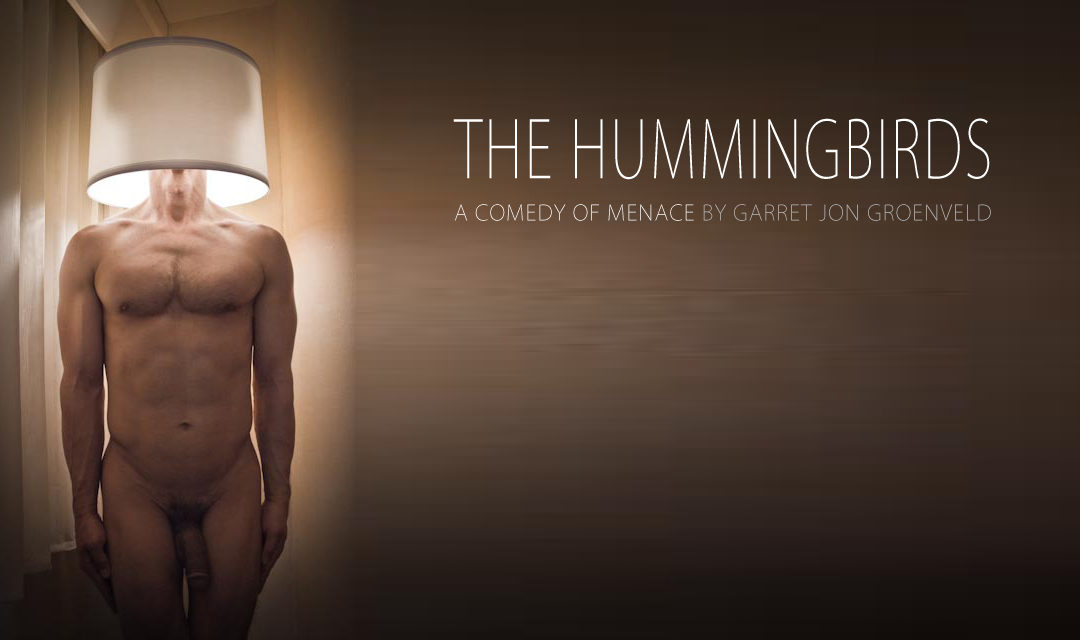 I am thrilled to announce that I will be directing THE HUMMINGBIRDS by Garret Jon Groenveld, winner of THE INTERNATIONALISTS 2012 Playwriting Contest.

I will direct a full staging of the play which will première at the Centro Musical y Artístico “Las Armas” in Zaragoza, on June 22 at 22:00.

The Hummingbirds – a comedy of menace – takes place in the very near future where, if you are out of a job for too long, you are assigned one by the unemployment office. Having their routines broken after an act of violence, two employment officers, one single, one married, react quite differently in the aftermath. The Hummingbirds explores the world that might be if we continue to do nothing about creating meaningful work, continue to do nothing to change our rate of environmental destruction, and continue to deny the real root of war and domestic terrorism. Funny, Fast and Foreboding.

Garret Jon Groenveld is a poet and playwright living in San Francisco, CA with an MFA in Poetry and an MA in Playwriting from San Francisco State University. He’s a founding writer of PlayGround and an inaugural member of the Writers in Residence program at the Playwrights Foundation. His plays have appeared in San Francisco, Amsterdam and New York. He teaches playwriting at the New Conservatory Theatre Center.

The Internationalists is a collective of directors from around the world whose mission is to create a more open, sustainable and interactive global theatrical community. They foster creative diplomacy in order to build bridges between artists and audiences of all nations. By developing a global network of artists, they promote the creation of contemporary performance with an emphasis on cross-cultural exchange and collaboration.

The 2012 Playwriting Contest was for a ground breaking new play that addressed the theme of ‘Presence/Absence’. There were 165 submissions from 26 countries.

The Internationalists made a public announcement on Saturday, June 16, 2012 at TheatreLab NYC that “The Hummingbirds” won the 2012 Playwriting Contest. This announcement was followed by an excerpted reading from the play. This presentation took place as part of The Internationalists’ 5th Anniversary Celebration. A live stream of this ceremony was broadcasted online.
On June 22, 2012, The Internationalists, in collaboration with the Centro Musical y Artístico “Las Armas” in Zaragoza, Spain, presented the first full performance of the play as the first full performance the brand new center for music and art. Director and Translator, Beatriz Cabur, will stage the play in the open air, in the courtyard of the theatre, so that anyone from the community can engage with this spectacular show.

Over the course of the next year, the play will be presented in New York, Berlin, the Hague, Bucharest, Mexico City and Zaragoza.